Over 400 ppm for the rest of our lives

“The world is quickening the rate of accumulation of CO2, and has shown no signs of slowing this down. It [surpassing 400ppm] should be a psychological tripwire for everyone.”
– Dr. Michael Gunson, NASA Jet Propulsion Laboratory 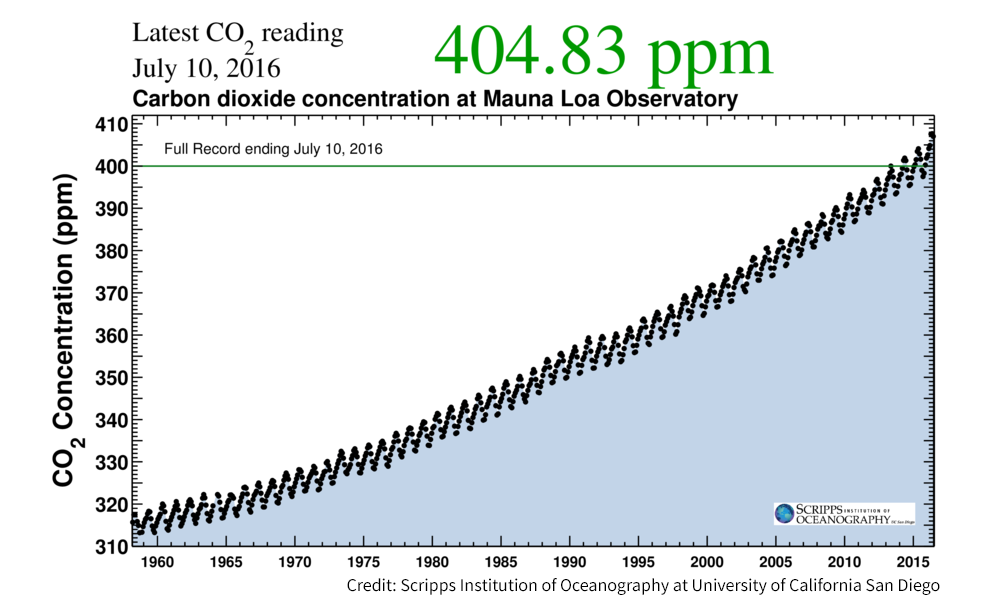 The global concentration of atmospheric carbon dioxide now stands at 404.83 ppm as of a July 10, 2016 reading at the Mauna Loa Observatory in Hawaii. To put this in perspective, climate scientists have been warning that a safe concentration for the Earth’s natural systems and all of us who depend on them is 350 parts per million, which we passed around 1990.

Many advocacy groups and climate scientists around the world had hoped to limit atmospheric carbon dioxide to less than 400 parts per million through efforts to reduce emissions, and then to work to bring that number down to the scientifically-determined “safe” level of 350. But we have collectively not done enough to keep from catapulting over that 400 ppm line.

We can see from the graph above that carbon dioxide concentrations in the atmosphere have been consistently trending up since the Observatory began taking measurements in 1958. It is estimated that global CO2 levels have not been over 400ppm in millions of years.

Scientists at the U.K.’s Met Office and the University of California, San Diego recently published an article in the journal Nature indicating that we should not expect to see carbon dioxide concentrations below 400 again in our lifetimes.

This long timeline is a direct result of how long it takes for carbon dioxide to be removed from the atmosphere by natural processes. So, even if we stopped human-caused emissions tomorrow, we would not see an immediate corresponding drop in carbon dioxide concentrations.

Yet aggressive and widespread efforts to reduce greenhouse gas emissions are exactly what is needed in order to return our atmosphere to the safe zone for future generations. According to NASA and Columbia University Atmospheric Scientist James Hansen, we must cut emissions by 6% each year in order to avoid climatic tipping points. Doing that successfully means that we may be able to keep the extent of climate change contained to the point where we can adequately adapt to its impacts.

Reducing emissions worldwide is one approach to getting our atmosphere back on track. The Paris agreement is a start, but far more cuts are still needed and they must be done at all levels from individual homes to local communities and nations. Everyone has a part to play in this symphony.

One of the most powerful tools for reducing greenhouse gases that is largely overlooked is how we manage our forests and agricultural lands – two issues we need to come to terms with if we are to respond adequately to the threat of climate chaos. We are in this for the long haul. And so are our children.

“We are a society that has inadvertently chosen the double-black diamond run without having learned to ski first. It will be a bumpy ride.”
– Dr. Gavin Schmidt, NASA’s Goddard Institute for Space Studies